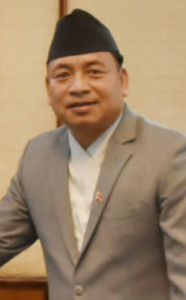 Nanda Bahadur Pun (Nepali: नन्दबहादुर पुन; born 23 October 1966), is a Nepalese politician and also known as Nanda Kishor Pun, is the second and the current vice president of Nepal, in office since 2015. He served as the chief commander of the People’s Liberation Army in Nepal. He was also a member of the Central Committee of the Communist Party of Nepal (Maoist Centre).