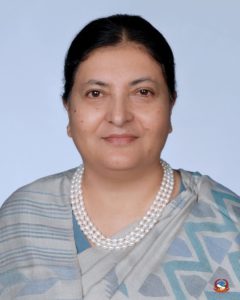 The president of Nepal (Nepali: नेपालको राष्ट्रपति, romanized: Nēpālakō Rāṣṭrapati) is the head of state, head of the executive and supreme leader of Nepal as well as the commander-in-chief of the Nepalese Armed Forces.The president is indirectly elected by an electoral college comprising the Federal Parliament of Nepal and the provincial assemblies of each of Nepal’s seven provinces, who themselves are all directly elected.

The office was created in May 2008 after the country was declared a republic. The first president of Nepal was Ram Baran Yadav. The current president is Bidhya Devi Bhandari, who was first elected in October 2015. She is the first female head of state of Nepal. The president is formally addressed as “The Right Honourable”.